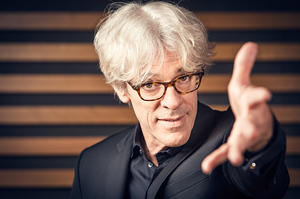 “My father, Miles Axe Copeland Jr. was both jazz musician and CIA man. He earned his crust deposing, installing, and propping up dictators but his real passion was music. So I grew up in Cairo and Beirut in a house full of instruments that had been placed by my father and ignored by my siblings. The piano, guitar, trombone and daddy’s 1936 Conn trumpet all suffered from my youthful abuse but it was the drums that really took hold. Spotting the telltale trait of musicianship (the kid will not stop!) my father had me in music lessons of every kind from the age of seven (late by OTS standards).

“Arabic music surrounded me in the streets of Beirut but indoors it was Stan Kenton, Buddy Rich from Papa and Stravinsky and Ravel from Mama. None of which informed my first gig, aged twelve with the Black Nights at the US Embassy beach club, where we played Kinks and Animals.

“When the caldron of Middle Eastern politics in Beirut got too hot in 1967 I was evacuated to boarding school in Somerset, England where I played in the school orchestra. This went well until Jimi Hendrix and teen-hood happened. That was it for trumpets and violins for the next twenty years.

“During these years my brother Miles was erecting a music business empire and I roadied, tour managed, mixed sound, and ran lights for many of the bands, learning all the crafts that go into show business. At Berkeley I was a jock at KALX and started an industry tip sheet College Event.

“After four years at the United States International University in England, the San Diego School of Performing Arts and UC Berkeley I ran off and joined my first pro band as a musician, Curved Air in 1974.

“Two years later Punk crashed into London and I started to conceive the band that would become The Police. I had the name, the cool logo and even an urgent manifesto before there were any players. Sting and Henry Padovani were recruited in 1976 but the band didn’t get it’s “sound” until Andy Summers joined in 1978. Most of us know how that turned out.

“We starved for the first two years though, during which time I had my own flash-in-the-pan top 40 hit “Don’t Care” under the name (and in full disguise) of Klark Kent. I played all of the instruments and sang the songs (sort of) but when the time came to play the crucial BBC Top of the Pops TV show I figured a band would look cooler. So the first time Sting, Andy Summers and I appeared on TV it was as the short-lived Klark Kent band. Then the Police thing happened, an adventure that lasted eight years before we walked away from the endless stadium tour life in 1984.

“Just before recording the last album in 1982 I got a call from Francis Coppola about scoring his art movie Rumble Fish. Without any idea of how it’s supposed to be done I set about inventing the wheel for myself and came up with a score that earned me a two-decade career as a film composer.

“From 1984 to 2007 I scored something like forty films, including hits like Wall Street, She’s All That, Highlander 2, and See No Evil Hear No Evil as well as quite a few duds that can remain nameless. In TV I scored the 80’s series The Equalizer and more recent Dead Like Me. In one demographic I’m proud to be known as the guy who made the music for the Play Station game Spyro the Dragon. Off the Score’s Judd Miller, btw, played on almost all of these missions.

“Meanwhile, back in 1982, Rumble Fish had one more gift to offer. The fight director, Michael Smuin, who choreographed all of the gang battle scenes happened also to be the director of the San Francisco Ballet. Taken with my odd music he commissioned a ballet, Lear that was given in 1985. This led to a commission from the Cleveland Opera, Holy Blood and Crescent Moon, which led to a return to orchestral music and a parallel career as a composer for the stage.

“There have been other adventures during the post-Police years. There were two albums by Animal Logic with Stanley Clarke 1987, 1991, another by Oysterhead with Les Claypool (Primus) and Trey Anastasio (Phish) 2001 and a decade long ride with La Notte della Taranta (Night of the Tarantula), an Italian Pizzica orchestra.

“There were a couple of documentary films: The Rhythmatist (1984), a harebrained trek across Africa in search of the roots of American music (sank without a trace) and Everyone Stares (2006) for which I cut my super8 footage of the early Police years into a movie (toast of Sundance – aired on Showtime). Then there was the inevitable book, Strange Things Happen, A Life with The Police, Polo, and Pygmies, published in 2009. Should have had more Police in it but the Pygmy stuff was good.

“At home in California I have a studio which is like a giant train set where my fancy friends such as Snoop Dog, Neil Peart, Ben Harper and Stanley Clarke come over to be the trains. I cut the sessions up as videos that can be found on my YouTube channel.

“Among my favorite brags are keys to the cities of Milan, New York, Dallas and Melpignano, a knighthood in France (Chevalier of the Order of Arts & Letters) and five Grammys. I was inducted into the Rock and Roll Hall of Fame in 2003 and for the last three decades I’ve been listed in Rolling Stone in the top ten drummers of all time, although Mitch Mitchell’s absence from that list does diminish its validity.

“For half a century I have enjoyed paying my dues and the biggest reward has been a beautiful family with wife, seven kids and new grandchildren still hatching.”