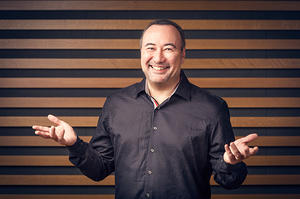 “I had my first media exposure the day after I was born, having been the first Christmas baby in Vancouver, Canada in 1959. My Japanese mother, Keiko Kimura, and Canadian father, John Parker had originally met as pen pals. At the age of 4, I successfully poked out the theme song of my parents’ favorite CBC radio show on the piano, which prompted lessons with my uncle, Edward Parker. My dad told Edward that he could be as tough on me as he wanted to be, and it worked. I made what was optimistically referred to as my ‘debut’ with the Vancouver Youth Orchestra at the age of 5.

“My strongest childhood memory is of sitting at the piano after dinner practicing scales and arpeggios, within earshot of all of my friends playing softball in the field across the back lane. I was also within earshot of my mother, who never let a wrong note go unmentioned, and surely kept a practicing tally counting up to at least 10,000 hours. Under the name “Jackie Parker” (which is what everyone still calls me) I entered literally hundreds of competitive events as a youngster, winning most of them and inspiring resentment in countless parents of other young budding prodigies.

“The Parker household only knew classical music, and my earliest piano hero was Arthur Rubinstein, a titan of the classical piano world who graciously included Vancouver on his international touring circuit. While in my teens, I discovered a new hero, Elton John, and devoured his music, learning most of it by ear. My further corruption into the world of rock’n’roll included learning music of Genesis, Frank Zappa and Pink Floyd. With a borrowed ARP Odyssey synth I played along with my favorite albums, dreaming of one day playing in a rock group.

“However, this dream was put on hold for about 40 years while I pursued classical music with a vengeance, studying with Adele Marcus at The Juilliard School in New York, winning the Leeds International Piano Competition in 1984 and touring the world in recital, chamber music, and as concerto soloist. As a guest soloist in the great piano concerto repertoire, I have had the truly awesome experience of performing in such sacred places as Carnegie Hall, the Sydney Opera House, the Berlin Philharmonie, Tokyo’s Suntory Hall and most importantly, my hometown hall: Vancouver’s Orpheum Theatre, where I had heard countless concerts growing up.

“Occasionally I’ve had opportunities to stray from the classical world: jamming with Doc Severinsen and Bobby McFerrin were both surprising and wonderful experiences. I’ve dabbled at hosting radio and television programs in Canada (Up and Coming, and Whole Notes,) helped my wife Aloysia Friedmann start the Orcas Island Chamber Music Festival in 1998 (still going strong!) and I am father to our daughter Sophie, whose musical tastes run from Savant to Beethoven to Panic at the Disco to Melanie Martinez to Lin-Manuel Miranda. In fact, one of the greatest musical experiences of my life was accompanying Sophie Parker in a performance of My Shot from the hit musical Hamilton, at an Orcas Island Chamber Music Festival event.

“Also interested in trying to show how it’s done, I wear my “Dr. Parker” hat as a Professor of Piano at the Shepherd School of Music at Rice University in Houston, Texas. Over the years I have lectured at Juilliard, NYU and Yale. My Concerto Chat videos give YouTubers a chance to learn about the piano concerto repertoire. I love explaining things; I can’t help it.

“My proudest Canadian moment happened in 1999, when I was invested as an Officer of the Order of Canada. I was recently named an Honorary Fellow of the Royal Conservatory of Music, which was especially cool as my co-honoree was k.d. lang. We both performed works by Canadian composers: I played Memories in an Ancient Garden by Alexina Louie and Blues Etude by Oscar Peterson, and she sang Leonard Cohen’s Hallelujah.

“I’m still committed almost entirely to the endless depths and revelations of the classical core repertoire, which for pianists is especially rich. But I’m thrilled to mix it up with occasional forays into unusual territory.

“When I perform I often think of my parents, and play ‘for’ them in different ways. I wouldn’t be on stage at all without the perseverance of my mother, who ensured I reached a level of playing that would make me competitive in a crowded field. My father was passionate about classical music and classical pianists, yet couldn’t read music and never took a lesson. His spirit lives on in all of those who attend concerts and have strong emotional reactions to what they hear.”