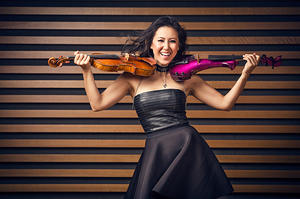 It was a sunny afternoon on April 23 in Seoul, Korea. That day, much to her 9-year-old sister’s dismay (and although she likes to claim she was much younger), Yoon Kwon was born. She started banging on the piano at the age of three. Her family moved to the United States when she was five; she started sawing on the violin at six; and she invaded The Juilliard Pre-College division at eight under the tutelage of Dorothy DeLay.

Those years are a blur because she was too young to remember anything, but she does recall having a wardrobe malfunction during her first performance playing the Bruch Concerto when she was eight. At thirteen, dressed in a poofy pink dress, she became the youngest ever winner of the New Jersey Symphony Young Artists Audition. She doesn’t remember much of that either, but the horror of leaving her bow in the dressing room overnight does plague her still.

She then started concertizing extensively with major orchestras such as the Cologne and Warsaw Philharmonics, and the California, Cincinnati, Colorado, El Paso, Houston, Honolulu, New Jersey, New Mexico, St. Louis, Wichita, and Vancouver Symphonies. She released her debut album under the RCA label in Korea, and there, also got a taste of her dream of being an actress, shooting a commercial for Pantene. Along with her older sister, pianist Min Kwon, she also hit the road performing recitals in over 100 cities in the United States. She made her New York debut at age 17 in Avery Fisher Hall playing the Stravinsky Violin Concerto, a concert she will never forget because the conductor, who shall remain nameless, started the last movement without her.

After one particular performance, she realized she wanted to pursue more aspects of her varied musical interests. Also, and perhaps more importantly,she wanted to enjoy life in her favorite city and home, New York. Then, like a sign from above, an opening for the Metropolitan Opera Orchestra first violin section opened up during the summer of 2004. She auditioned and won. She started the job in April of 2005, while finishing up her Artist Diploma at the Juilliard School, after already earning her Bachelor’s and Master’s degrees. Yoon is probably the world record holder for years spent at The Juilliard School. When she did finally graduate, she knew she must have more chamber music in her life. Her three years at the Marlboro Festival, aged 15-17, cemented her love of chamber music. She most fondly remembers her Schubert Cello Quintet debut with the late David Soyer during her second year there.

She joined The Chamber Music Society of Lincoln Center II from 2006-2009. Three is the magic number so along with her Met and CMS appearances, she joined a jazz group and learned to improvise in various clubs in NYC. She also made her Carnegie Hall recital debut in 2008, having prepared for the concert from the hours of midnight until 2:00 AM after opera performances. Summers for Yoon, along with performing in music festivals such as Rome, Verbier, Kuhmo (Finland), Aspen, Ravinia, Marlboro, Santa Fe, Spoleto, and La Jolla, included traveling the world aboard the number one luxury cruise line, Crystal Cruises. As featured headliner, it was on the open seas where she developed a love of food, wine, travel, and fashion. It was also where she started dabbling in electric violin. In 2009, she formed a crossover band, Vintage Fire and rocked out NYC in venues such as Le Poisson Rouge, Sullivan Hall, and Webster Hall.

Yoon is currently in her eleventh season with the Metropolitan Opera Orchestra, where playing first violin is the closest she will get to becoming a soprano diva. She loves teaching and is a faculty at The Mason Gross School of Music at Rutgers University. Active on social media, her Youtube channel, BYoonique features all her passions, including music, food, beauty, fashion, travel, and lifestyle and has over 3 million views.