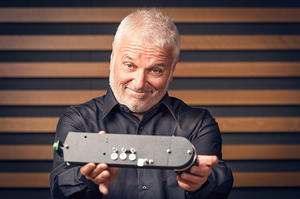 Judd Miller is the renowned and leading exponent of the EVI (Electronic Valve Instrument.) His expertise on the instrument and his superlative sound design from his enormous, self created sound library has him as first call, and one of the most popular musicians for top movie scores, television shows and record albums. He can be found around the world, working on movies and recordings with top composers and orchestras in London, New York, Berlin and mainly Los Angeles. His work with such composers as Stewart Copeland (2 dozen films), Maurice Jarre (3 dozen films), Danny Elfman, John Williams, and James Horner can be heard on well-known movie soundtracks.

Stewart Copeland has referred to Judd’s versatility and his musical contributions by referring to him as his “musical Swiss Army Knife.” Miller’s programming and sound design is evident on albums by Herb Alpert, Michael Brecker, Yellowjackets, Vince Mendoza, Peter Erskine, and many more.

Judd was also a trumpet player in a previous existence, also playing on many films and television shows in Los Angeles. The EVI extends that sensibility of playing the trumpet into the electronic realm, a source of great artistic satisfaction. His first major recording was for the soundtrack of Karate Kid II, as the voice of Mr. Miagi. His heart has always been in improvisation, and the EVI has created a way to other places never imagined.

For an interview with Judd Miller about the EVI, please visit PatchmanMusic.com.